Usually, things don’t fall into a certain condition and we tend to leave the Flow like that.

Use Terminate control in a Flow in Power Automate to correctly end a Flow Run by declaring that it wasn’t successful.

At times, when we use Condition i.e. If True or False, we put everything in True and nothing in False, just keeping it blank.

And when the condition turns out that it doesn’t match the True part, it’ll go in False part and end the Flow. The status will still say Success because the Flow ran completely without any issues.

And when you try to search that Flow Run amongst all the results, you’re not quite sure because they show all Succeeded. This is where you can use Terminate Control to identify what didn’t go according to the condition so that you can identify that the Flow didn’t complete it’s intended purpose.

You can use Terminate control to stop a Flow execution and result in a different message other than Success so that you ease the identification of which Flow Run went wrong just by looking at the Flow Runs results.

You can chose between Different types of termination Actions

You can choose between Failed or Cancelled.

If you selected Failed, you’ll be able to post a custom error code and a message 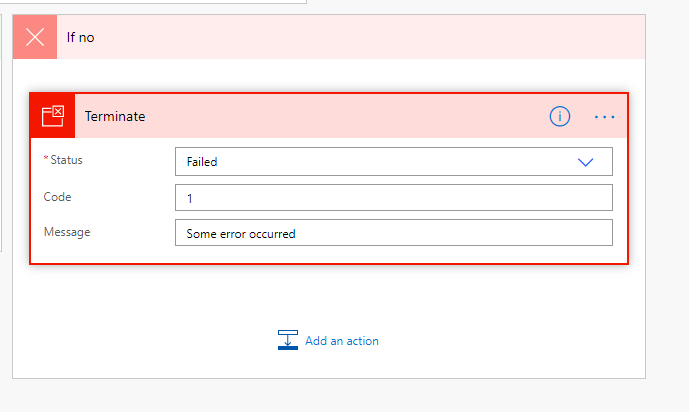 Cancelled
And when you select Cancelled, you don’t need to do much.

So when the If condition is not True, if will go in False like shown below –

And if you open the same, it’ll show that it wasn’t successful.

If the Status was chosen as Cancelled, Cancelled will appear

That way, you can pick the Failed Run and investigate the Flow based on the way you chose to terminate the Flow.

This site uses Akismet to reduce spam. Learn how your comment data is processed.

All posts and code examples are my personal findings during my personal time, and as such, all the views and opinions expressed here are solely mine and don’t represent the views or opinions of my employer(s), clients, or associates. All content and information are provided "AS IS" and any express or implied warranties, including, but not limited to, the implied warranties of merchantability and fitness for a particular purpose are disclaimed. In no event shall I be liable for any claims, losses, or damages of any third party or for lost profits or any special, indirect, incidental, consequential or exemplary damages, howsoever arising, even if I have been advised of the possibility of such damages.
Kindly practice suggestions from my blog posts at your own risk and by making informed decisions.